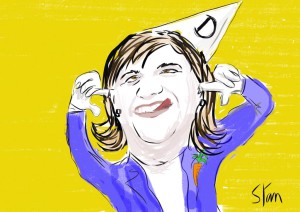 The impact of the free market is really being felt in Redditch where two academies – Tudor Grange Academy and Ridgeway Middle School – have been given permission by the Regional Schools Commissioner to change the age range of children they admit.
The area currently operates the three tier system with first schools from Year 1 to 4, middle schools from Year 5-8 and high schools up to the age of 16 or 18. Now these academies want to move to two tier education.  Almost 3,000 people signed a petition to prevent the proposals while Joy Vater, deputy of Walkwood Middle School, warned in the Redditch Standard that the move had the potential to cause a ‘tsunami’ across the borough.

Parents chained themselves to the school railings to demonstrate their opposition to a forced academy at St Andrew and St Francis in Willesden, North West London this week. They were supporting teachers during two days of strike action at the Brent primary school.  This followed a one day strike the previous week. Teachers had said they would call off the action if the Interim Executive Board (brought in to replace sacked governors) agreed to hold a parents’ ballot.  The IEB refused to engage with the teachers’ union.

And in Lewisham staff from three unions across three schools took two days of joint strike action on 24-25 March to protest against academy plans.  Parents and students joined them on the picket lines at the Prendergast schools:  Hillyfields, Ladywell and Vale.  One sixth former said ‘We don’t want an academy because its back door privatisation’.  Campaigners likened their fight to save the community schools with the recent victorious campaign to save Lewisham hospital.

Will Norfolk County Council take the Department for Education to the high court to save the last community secondary school in Norwich?  The Tory DfE Academies Minister, Lord Nash, has signed the academy order paving the way for the Inspiration Trust to take over Hewett secondary school.  Norfolk Council had put forward its own proposal for the school but Lord Nash was minded to back Inspiration.  Their chair is Tory donor Sir Theodore Agnew, who also chairs the DfE’s own academies board.  Incidentally, the signing of the academy order grants £150,000 of public money to the Inspiration Trust to cover ‘pre-opening costs’.

The Department for Education is consulting on how it might measure academy chain performance.  Unfortunately for them, the statistics show that local authorities outperform their beloved chains and that the vast majority of chains perform – guess what? – at the national average.  According to the tables – which judge both value added performance and the rate of improvement at GCSE – the best performing chains and local authorities are in London.  The factors behind London’s success are the subject of much discussion and may include economic prosperity, aspiration, migration, the London Challenge and of course better funding.  And the highest performing chains – ARK and Harris – both deliberately focus their secondary provision in London.

Oasis, near the bottom of the league, has a lamentable track record with Ofsted too: more than half of its academies have been judged inadequate or requiring improvement. This week another Oasis academy, Lister Park in Bradford,  has been judged inadequate in every category and told it requires special measures.

No Oasis for Pupils or Parents

In Kent, the Oasis Trust announced it would close its Hextable academy in 2016 due, they said, to falling rolls.  But the chain only took on the school last year when the roll data was already well known.   The academy includes a specialist unit for twenty children with disabilities and now the local authority must find appropriate new places for these youngsters.  Oasis was criticised for its handling of the announcement, with some parents hearing the news through Twitter, rather than a formal consultation.

At the very bottom of the sponsor tables, we find the University of Chester.  They have had to hand back two of their academies and are prohibited from opening more.  And they are not alone. Universities as sponsors seem to have a poor track record both in terms of financial management and Ofsted ratings. As the college and universities lecturers union (UCU) has remarked: ‘Most colleges …. have their hands full running their own organisations, and staff are over stretched. Why should they take on running another, different and complex organisation?’.

STEM 6
Last year we reported on the 6th form free school where bosses tried, and failed, to pressure staff into signing draconian zero-hours contracts. Teachers courageously stood up to the then-Principal, John O’Shea, and to the Chair of Governors, Tony Sewell.  Mr O’Shea appears to have left the Islington-based school just before Ofsted judged it inadequate in every category.  Ofsted noted that the governors, led by Mr Sewell who is also London Mayor Boris Johnson’s education adviser, had an inadequate understanding of the reasons for the sixth form’s poor results.

Durand Academy can’t keep out of the news.  It must be the almost £400,000 it paid for PR to PLMR, a company owned by one of the academy directors: Kevin Craig, who is also a Labour Councillor in Lambeth, South London.  The academy’s boss, Sir Greg Martin, got a grilling from parliament’s Public Accounts Committee where chair, Margaret Hodge MP quizzed him about the Trust’s tax affairs and the transfer of assets worth £15,000,000.  The DfE has issued a financial notice to improve and the academy trust faces an enquiry by the Charities Commission.  Entrepreneurial Sir Greg admits that as well as a leisure company, he ran a dating website from the school’s premises.

Good news from Twydall Primary School in Medway.  Lord Nash, Academies Minister, has written to the governors to say that, for the moment, he will not impose an IEB at the inclusive Medway school.  This follows last week’s decision by the DFE’s preferred sponsor Thinking Schools Academy Trust (TSAT) to pull out of the deal.  Parents and governors had claimed that TSAT was not an appropriate sponsor for their community school which specializes in educating able-bodied and physically disabled children together.  89 per cent of parents voted against the TSAT plan, mounting an online petition and organising protests at the school.  Meanwhile, HMI has found that the school is making progress under the ‘astute, inspirational leadership’ of its interim headteacher – without the input of an academy sponsor.