We Don’t Need No Edu-Business 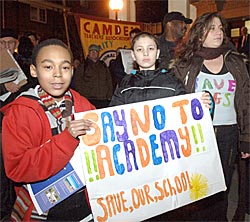 Trevor Averre-Beeson was the Head teacher at Islington Green and pushed through the move to academy status against fierce opposition from trade unions and the community in 2008. It was replaced by a group from the City and renamed City Of London Academy, Islington. It continued to hit the headlines after becoming an academy when, in 2012, it posted the lowest results in the borough and was one of 107 schools nationally below the floor target.

Trevor Averre-Beeson then went on to found ‘Lilac Sky Schools’ a company providing school support and running schools as an academy trust. The school currently has 10 schools that is runs as sponsor. Four of these are to open in Sept 2015. The DFE has agreed to the sponsor expanding but there is NO evidence that they have the capacity to run schools successfully. Of their 6 schools currently open only one, Tabor Academy, has been inspected by Ofsted and that has gone straight into special measures (Jan 2015). The sponsor have announced that they plan to change the name. http://www.braintreeandwithamtimes.co.uk/news/braintree_witham_news/11720888.New_name_for_Tabor_Academy_after_Ofsted_puts_school_in_special_measures/

Trevor Averre-Beeson wrote in 2012 that he recommended for-profit companies working in under performing schools. http://www.theguardian.com/education/2012/feb/19/for-profit-firms-state-schools He has now written a book about his experience, called ‘We Don’t Need No Education – 101 ways to transform a school’ .

In 2007 he was hired by a American private company Edison, to ‘turn around’ Salisbury School. The headline in the Daily Mail in 2008 read “Hired education specialists that failed to improve low-achieving  state school face the axe”. The contract cost the authority £1m. The school was converted into an academy, Nightingale Academy, in 2010, currently sponsored by AET and with a ‘requires improvement’ Ofsted grade. Clearly not ‘turned around’ by Mr Averre-Beeson’s influence.

His advice to teachers has been reported in newspapers recently, together with publicity about his new book. Asking questions such as “Why are you swinging on the back of your chair?” and “What time do you call this?” are discouraged. He has spoken about ‘assertive dispciline’ , about the introduction of an internal exclusion room, so that punishing children does not involve sending them home to watch television. He advocates that children should ‘do as they are told’. In an interview in the Guardian in 2007 his political persuasion was described as:

“Averre-Beeson is right on board with the New Labour agenda. Ofsted is a good thing, league tables the best way to lever up standards”

In an interview in the Islington Tribune this week, Ken Muller, who was NUT rep at Islington Green, said “We think schools are a public service, not a marketing project.” http://www.islingtontribune.com/news/2015/jan/former-headteacher-hits-back-claims-islington-academy-school-tony-blair-rejected-his-s