“I bring good tidings for all those hard working campaigners up and down the land fighting the academies programme. 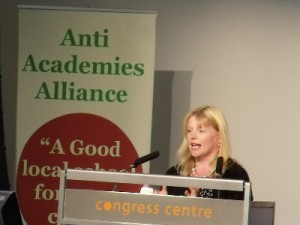 We have had the most extra-ordinary result in our campaign in Louth, which can be attributed directly to the strength of the governing bodies. We have four schools looking to merge into one new academy.  We also have a county council who have just endorsed a policy to state that ALL schools should convert to academy status with CfBT.

So any good news is most welcome at the moment.

On 8th September, the governing bodies of two of our schools met (they are currently in a hard federation). It was recommended to them that they undergo a local authority reorganisation of schools, with the new governing body making any future decision on academy status. The resolution that they passed states “it was unanimously agreed that the preferred option is to merge Monks’ Dyke Technology College, Tennyson High School, Cordeaux School and Wolds College into a single entity maintained by the Local Authority.”

Two versions of the same result then started. Version 1 was from one of the heads and one of the chairs of governors. It stated that the schools had voted to go into a LA reorganisation one end, and out the other as an academy. Version 2 was from staff and governors, who were emphatic in telling me that they had expressed a preference to remain in the local authority. They felt that they had been duped. A statement was prepared, which contained a strong emphasis on eventual academy conversion. But the governors were not having it. They were strong and vociferous, and succeeded in getting the statement re-written, with the precise version of the resolution included. This was the unanimously endorsed by the second governing body.

Funnily enough, the schools have not issued a press release on this decision, which I will do for them today, as I mean to be helpful!

For those of you running campaigns right now – please look after your governors and teachers. If you give them the time and space to off load the stresses that they feel about the conversion, they will pay you back 100%. One of the best moves I have made in the Louth campaign was to start holding private meetings just for staff and governors. It has led to a real empowerment of the governors, and provided a forum where all can air views and develop clear tactics.”

Long live the stake-holder governance model that Gove is trying to smash.

And if we can bring about this type of result in Lincolnshire at the moment, it can happen anywhere. For anyone else reading this in Lincolnshire, PLEASE CONTACT ME ASAP. We need a coordinated and strong campaign, and I am more than willing to help.”